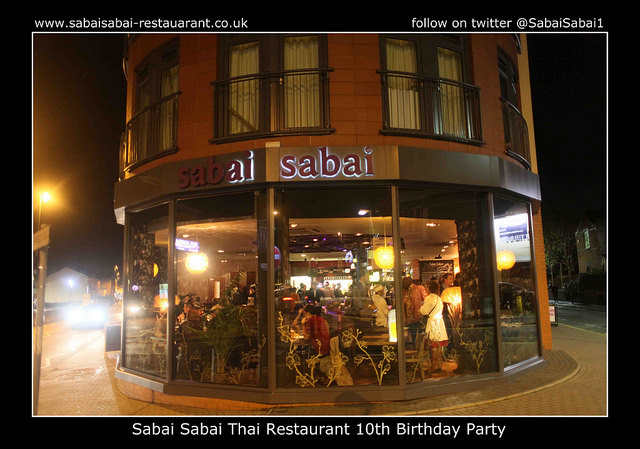 There’s nothing like a good birthday party to get rid of the holiday blues, so after a whirlwind trip in Marrakech, exotic Thailand was my destination this week as I was invited along to the Sabai Sabai Harborne 10th Birthday Party.

The beautiful Ting from The Ting Thing invited me along, and it was fantastic to see Natasha from Nutella Tasha, Alev from Bella & Robot, the lovely Elijah from Bodhi & Birch, Tara from East Village Agency and Xenia from Makeup Central, who you may be seeing over on my beauty blog soon! 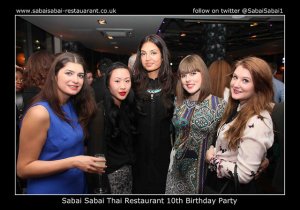 But back to Sabai Sabai, it’s hard to believe this little gem is 10 years old as it still looks and feels modern and fresh, and with a young crowd, live music and great atmosphere the party was set to be a good one.

There were lychee cocktails adorned with orchid flowers and strawberries on arrival, as well as mocktails for the drivers which was great as I’d come straight from work in the car. I love lychees so I really enjoyed the mocktails and the decorations made them feel extra special.

The food was what I was really looking forward to though as I’ve not eaten at Sabai Sabai before. We were treated to a selection of nibbles and some miniature portions of main meals. The tempura prawns were fantastic, huge juicy prawns with a light crisp batter and a sweet chili dipping sauce, served in a poppadom bowl which looked fab! We also had Thai spring rolls, chicken satay and some amazing and spicy sweetcorn cakes. 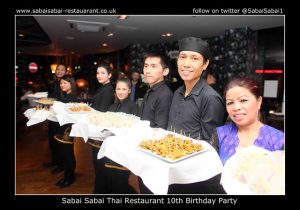 Onto the mini mains, I got to try the roast duck in honey sauce which was beautiful, tender and delicious, followed by the Pad Thai which was really good, with fresh crunchy vegetables, soft noodles and savoury sauce. I was really hoping to try the massamun curry, but it looks like I’ll have to make an excuse to go back!

As well as the celebrations, there was also a raffle to raise money for Children In Need, with prizes supplied by the restaurant and Singha Beer, where the lucky Natasha won a meal for 2, here’s hoping she invites me when she goes back!

I also got to meet Juree, the owner of Sabai Sabai, who is a really lovely lady and came over to speak to us personally and thank us for coming.

We were each given a goody bag to take home with a really pretty scented candle shaped like a flower, which was a lovely touch too. 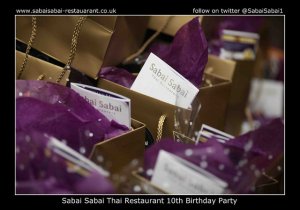 Special thanks to Jas Sansi too for the use of his images. You can follow Jas on Twitter at @jassansi

So happy 10th birthday to Sabai Sabai, and here’s hoping there’ll be one opening on my side of the city soon!