Nestled in the Mailbox, away from the main drag of bars and restaurants outside, Tom’s Kitchen isn’t necessarily the first place you might think of for an evening of summer cocktails, but their new summer cocktail menu makes it worth seeking out.

I was invited along one evening with my friend to drink our way through their seasonal offerings and enjoy a bit of a masterclass.

The seasonal cocktail menu spans vodka, whisky, gin, tequila and cachaça with a good mix of flavours from the fruity to the smoky. I started with the Aviatrix – their take on the classic Aviation – while my friend went for the Marmalade Medley. 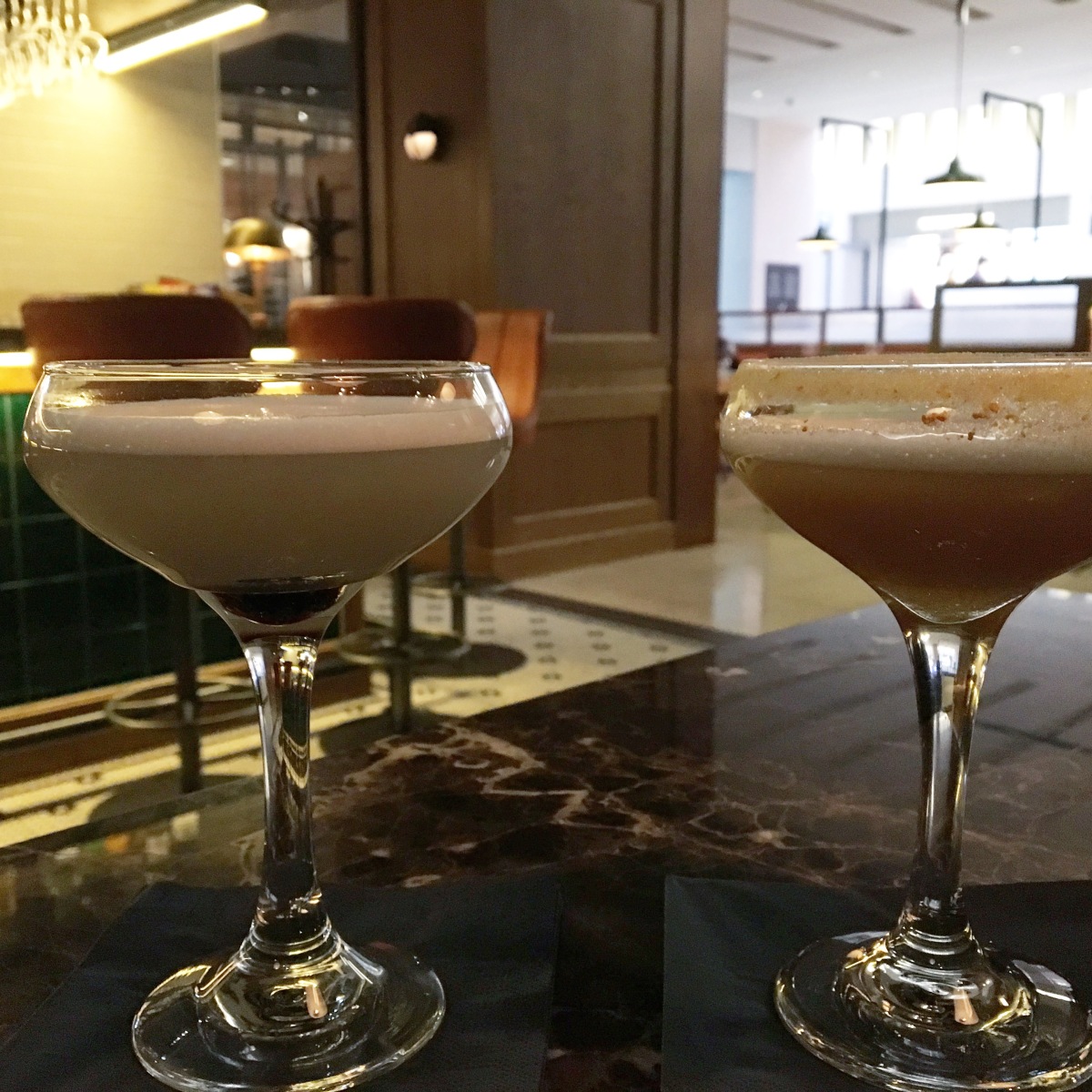 The low lighting at Tom’s Kitchen doesn’t do it justice, but the Aviatrix was the most luscious shade of lilac, with a subtle hint of lavender to make it different from a standard Aviation.

The Marmalade Medley was a hit too, all the orange flavours gave a summery feel without drowning the actual flavour of the bourbon.

For round two, we tried the Honey Suckle and Acai for Sore Eyes. I’m a big fan of Zubrowka Vodka (I blame my lovely Polish friend) so I was excited to try this one. 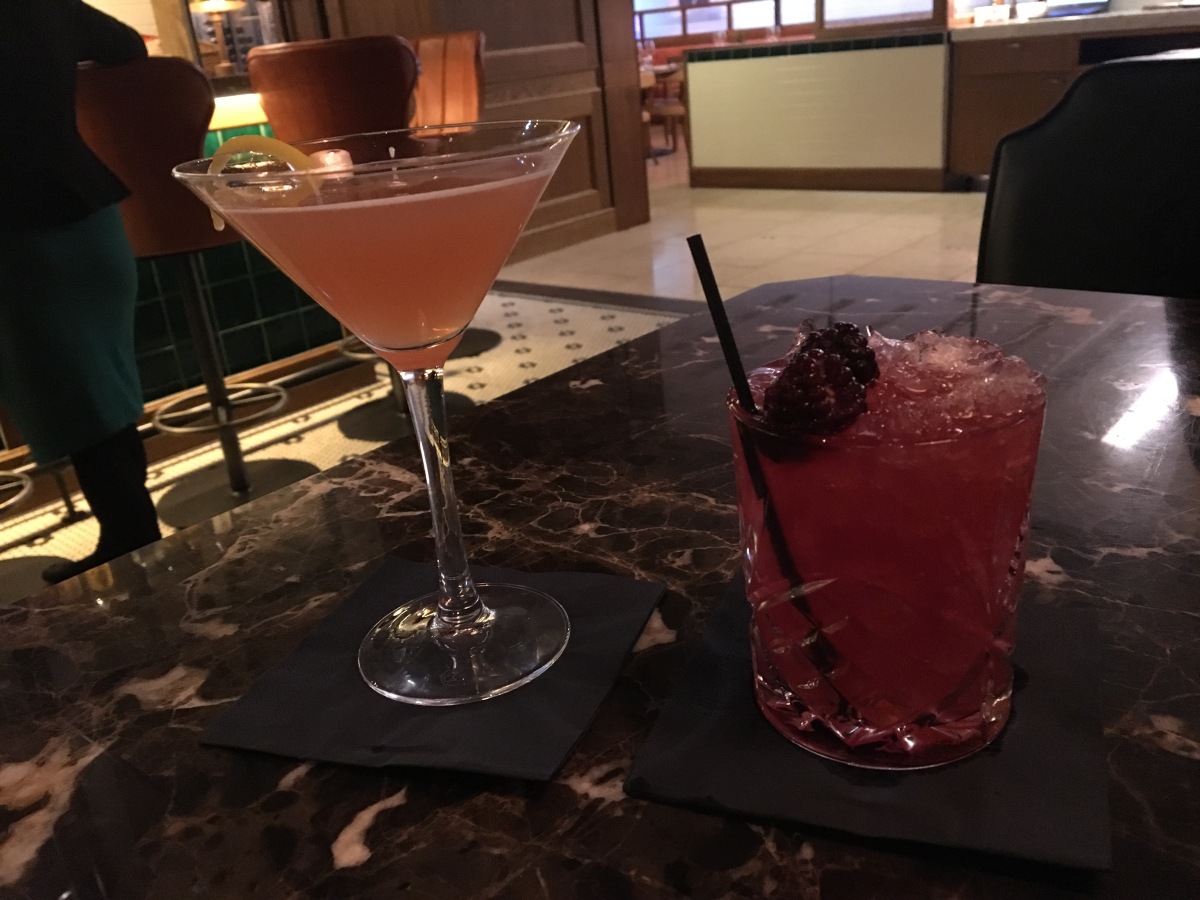 The presentation of both drinks was really pretty, but the flavours were a bit hit and miss. I wasn’t too keen on Acai for Sore Eyes. Despite a caipirinha being one of my go to summer cocktails, I just felt this was a bit lacking in flavour. If you’re a fan of fruity cocktails that don’t pack too much of a punch, it would be a good choice, but my preferred option was the Honey Suckle. 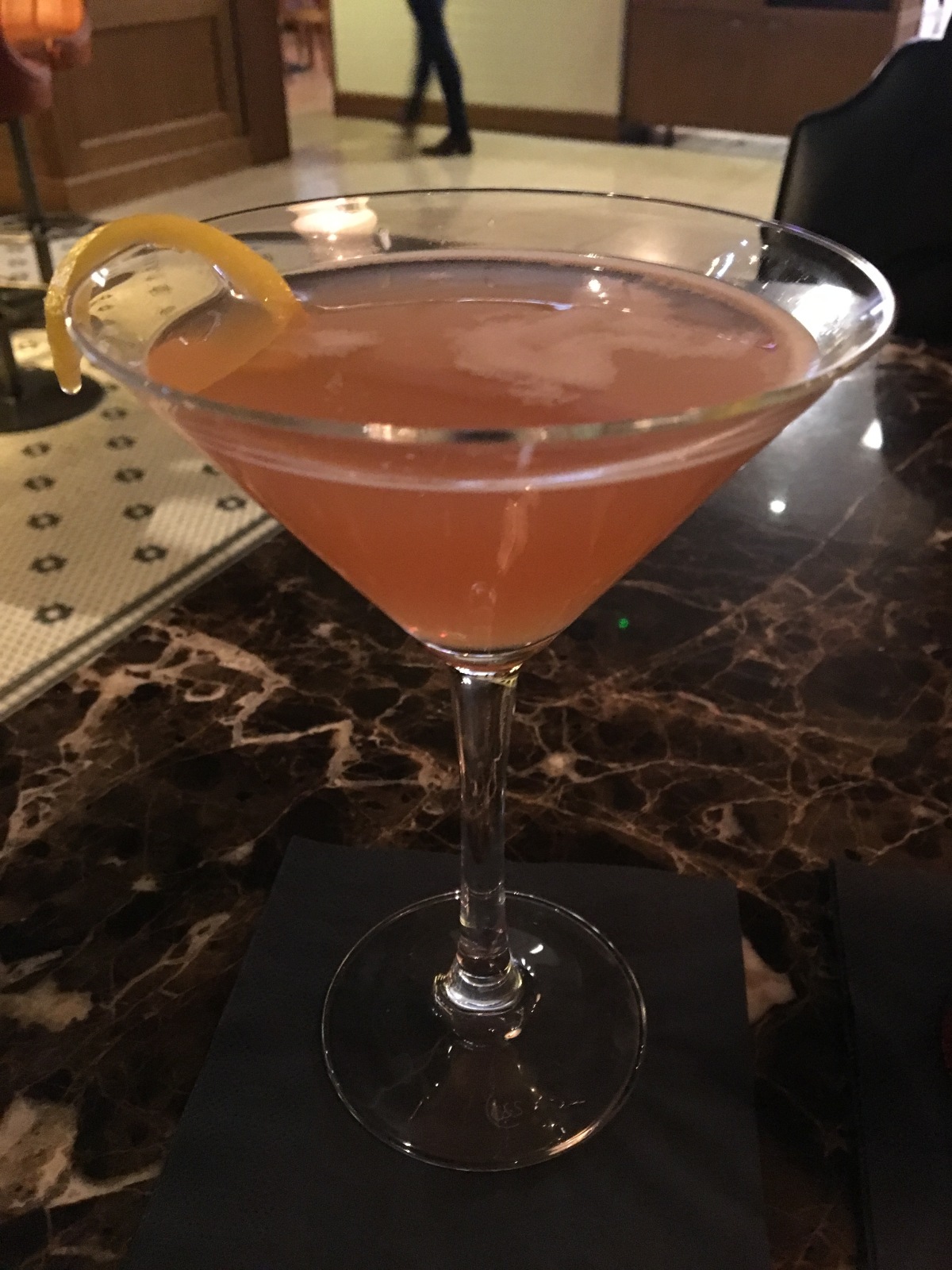 This had a great balance of sweet and sour from the honey and grapefruit, but the flavour of the vodka still came through. I could easily drink more than I should of these on a warm evening.

Next we tried the Oakie Cokie and Tequila Mockingbird, and I headed to the bar to capture some of the action. 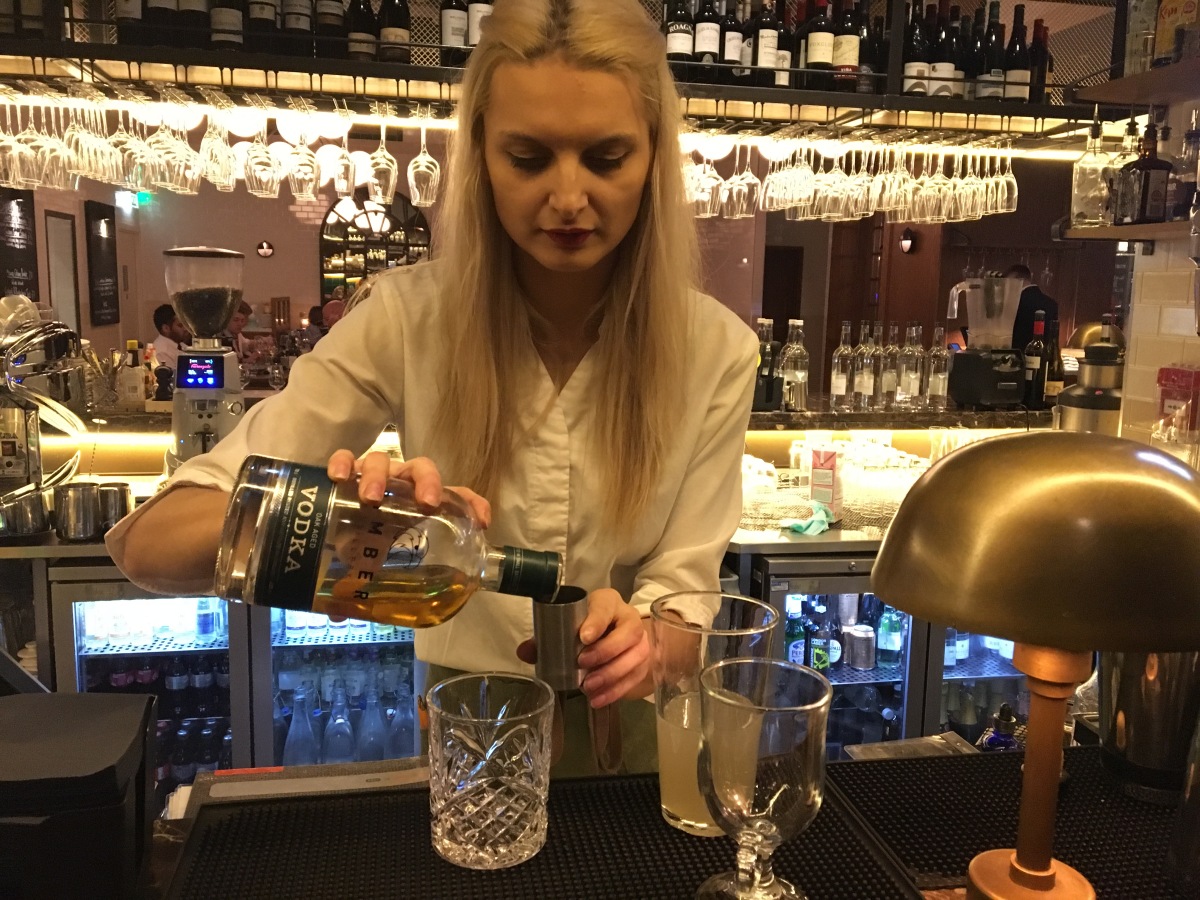 The Oakie Cokie is the Tom’s Kitchen take on a Mint Julep, but using oak aged vodka instead of bourbon, to make it a bit lighter. This went down very well with both of us. A compliment as my friend is a big whisky fan!

The Tequila Mockingbird (great name) was fun to watch being made, as the bitters used make an impressive foam without the use of egg whites, which is good news for vegans. 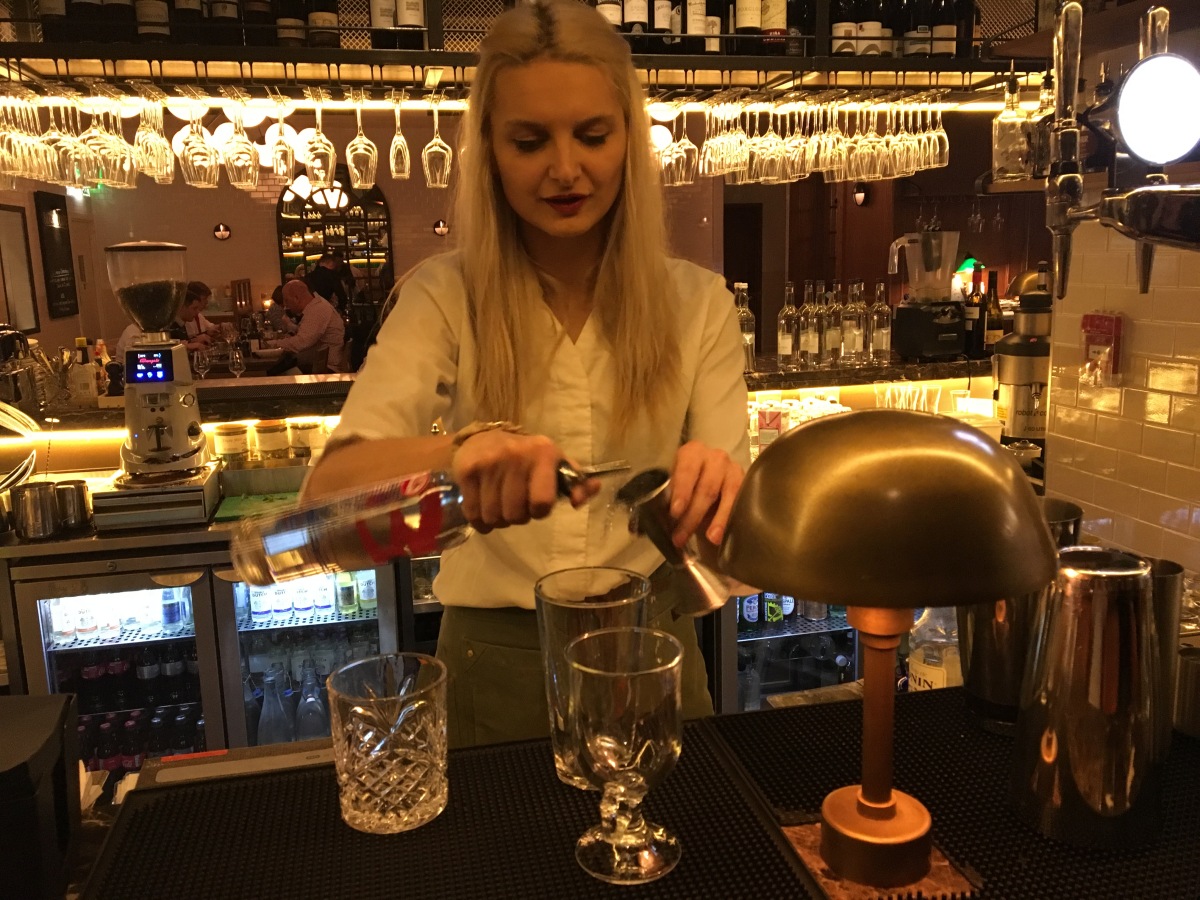 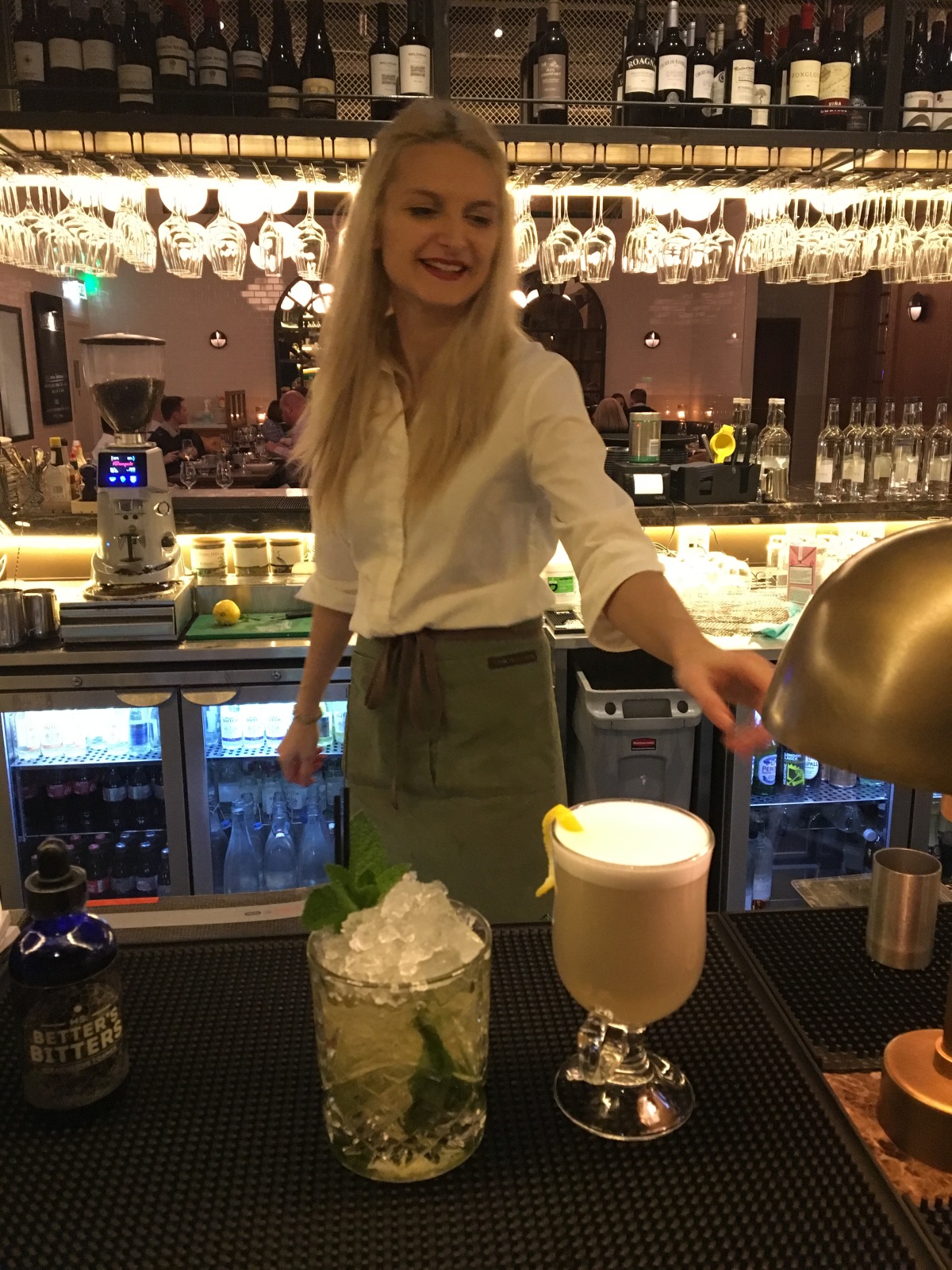 The finished drink had a lovely mouthfeel, quite creamy, but it didn’t have as much lavender flavour as I’d hoped for.

We finished off with a Spring Time Breeze each, which was a light and refreshing one to finish on, with plenty of fruit flavours.

It was a mixed bag for me, but that’s hardly surprising seeing as you’d normally pick 2 or 3 drinks that you like the sound of, rather than dutifully drinking your way through every option!

At £10 per cocktail Tom’s Kitchen is on the expensive side, there are definitely places you can go in Birmingham where you’ll pay less, however I believe you’re paying as much for the service at Tom’s Kitchen as you are the actual drinks.

Our bartender was attentive, knowledgeable and ever so friendly. She was more than happy to answer me as I quizzed her on how she was making the drinks, and really looked after us on the night.

Have you tried the seasonal cocktails at Tom’s Kitchen yet? Which is your favourite?

I was invited to review the seasonal cocktail menu at Tom’s Kitchen, so my drinks were complimentary. As always, views are my own and I was under no obligation to provide a positive review.