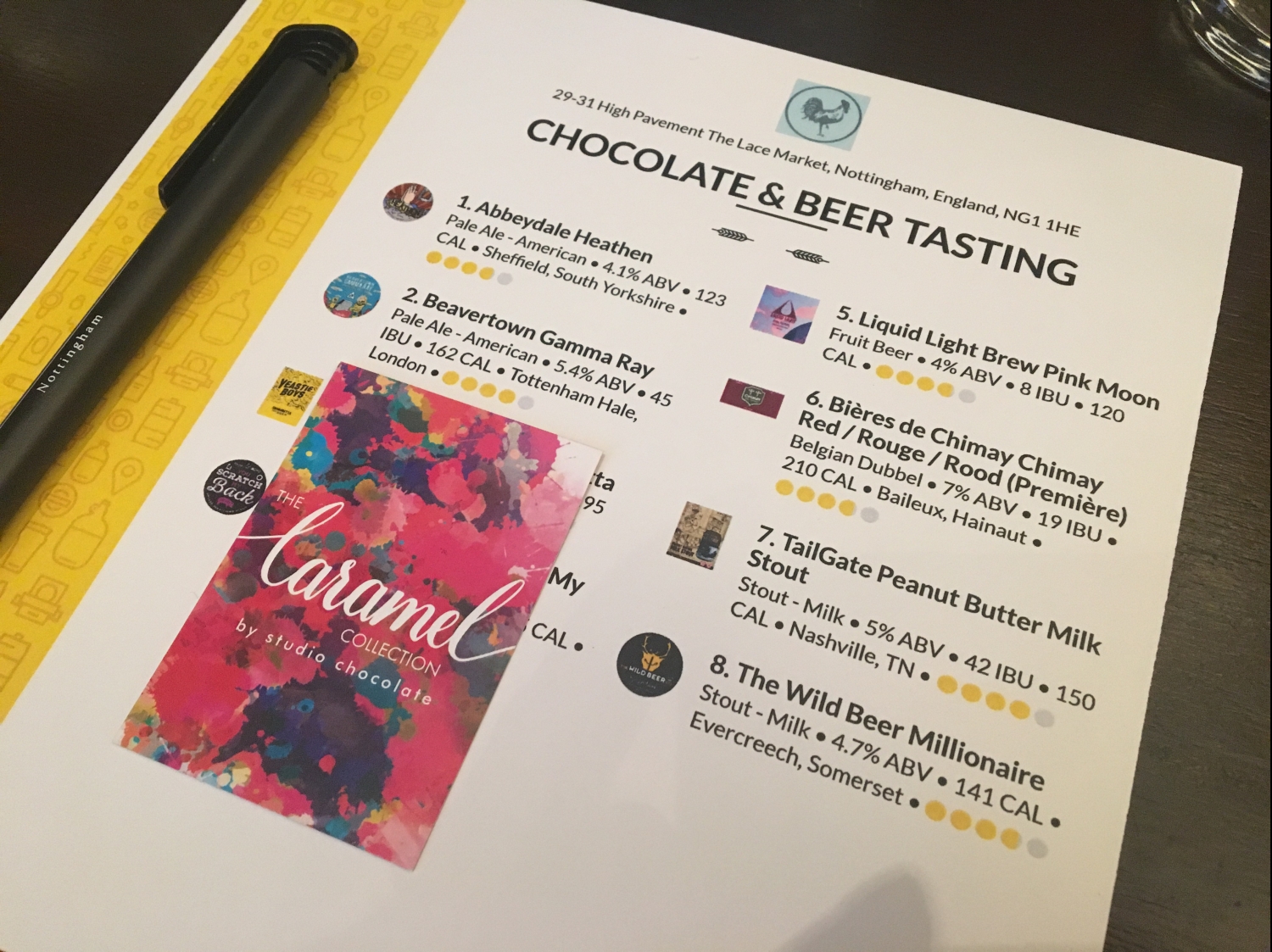 Ever since I tried my first sip of Punk IPA, more years ago than I care to remember, I’ve been a craft beer convert. Getting smacked in the face with the citrus flavour of new world hops and a few percentage points higher ABV than the watery excuse for lager I was used to drinking, was an eye opening experience that genuinely changed my taste. In the years since then, Brewdog have been heavily criticised for various things, but regardless of that, I will always credit Punk IPA as the thing that got me into craft beer.

Pairing craft beer and food is getting more and more popular now. It’s usually beer & cheese that’s on offer, but Cock & Hoop in Nottingham have done something different, as they put on their first Beer & Chocolate tasting event last week. Cock & Hoop is a lovely little pub attached to the gorgeous Lace Market Hotel in, funnily enough, Nottingham’s Lace Market area. As well as doing THE BEST pies in town, they’ve got an ever changing selection of real ales and craft beers with a focus on local breweries.

Last week they held their first ever beer & chocolate tasting evening with local chocolatiers Studio Chocolate and craft beer shop & bar BottleCraft. I’ve not got a big sweet tooth, but I love beer, and I was intrigued to see how that combination would work together so I headed along after work with my lovely friend to check it out.

The event was really intimate with only a small number of places available, which made it feel quite exclusive. Our menu for the night involved 8 – yes, 8 – beer samples (and by samples I mean 1/3 pints) ranging from APA to Stout with a few surprises thrown in for good measure.

We started off on the lighter end of the spectrum with an American Pale Ale – Abbeydale Heathen – a 4.1% session beer that is dry hopped with mosaic hops from the USA, for an aromatic, tropical fruit flavour.

Abbeydale are arguably one of the founders of the craft beer movement in the UK, using traditional techniques to make really modern beers.

This particular one had a lot of grapefruit flavour and a hint of pine for me. This was paired with a dark chocolate and orange caramel, which really amplified the citrus flavours in the beer.

Beer 2 was one of my go to session beers: Beavertown Gamma Ray – a 5.4% American Pale Ale which is credited with being so good, even the Americans can’t make APA as well as this. 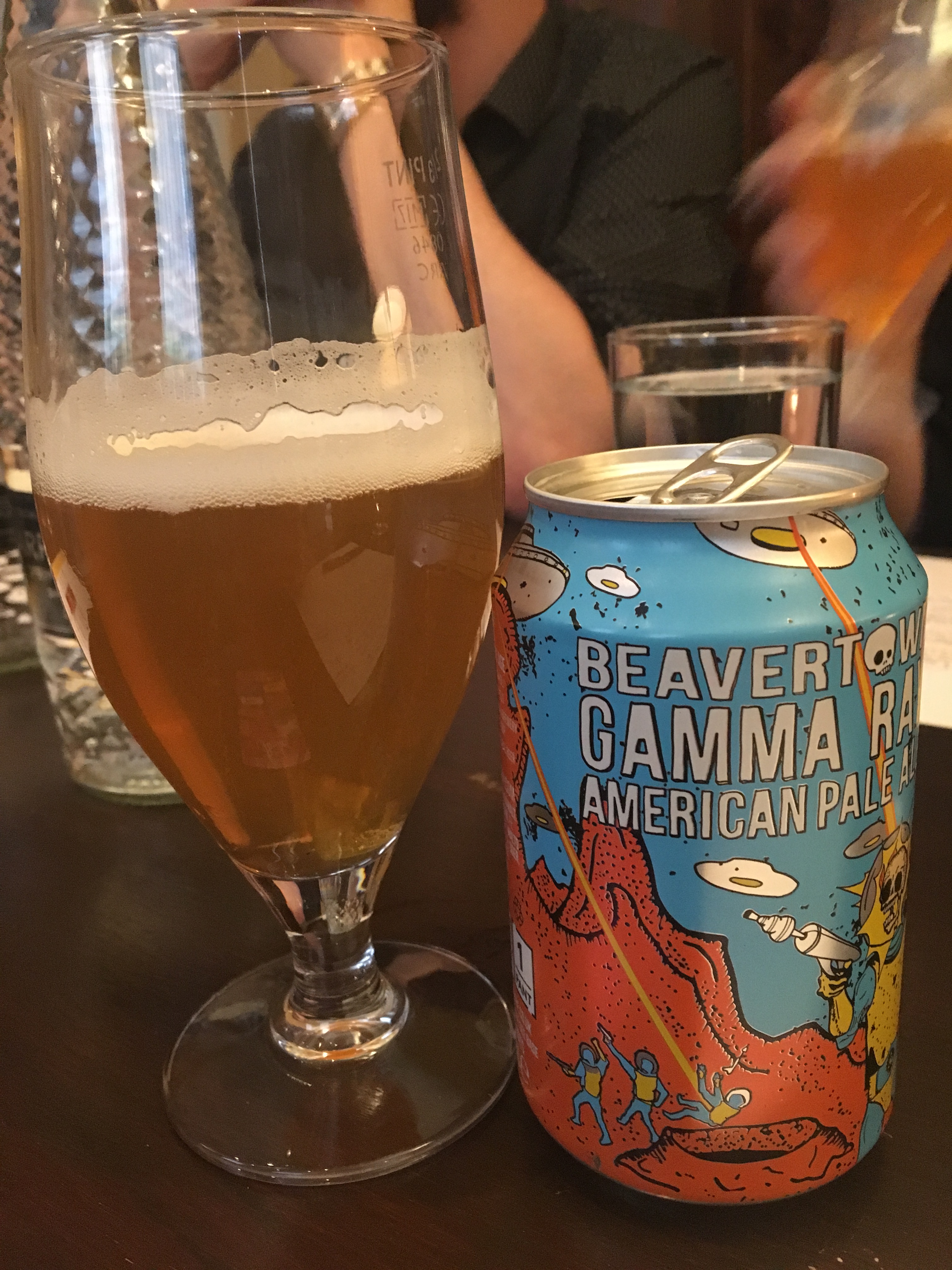 Based in Tottenham, Beavertown started life in the back room of a BBQ joint, funded by none other than Robert Plant’s son Logan. Rock and fucking roll. The combination of Amarillo, Citra and Zeus hops make this beer super fruity with a hint of bitterness, but less aggressive and easier to drink than the Abbeydale.

This one was paired with a milk chocolate mocha caramel, which sounds weird – coffee and citrus? – but it totally worked. The bitterness from the coffee brought out a smoother flavour in the beer, while the citrus in the beer gave an almost black forest taste to the chocolate.

Beer 3 came courtesy of Yeastie Boys, a nomadic brewery from New Zealand who don’t have their own brewery, but make beer under license at other breweries, including Brewdog. These guys are super specific about the conditions their beer is brewed under (think monitoring the pH of the water that goes into it), but clearly it pays off as they’ve won tonnes of awards.

The beer we got to try was Gunnamata – an Earl Grey IPA which is literally bursting with bergamot flavour, with a background bitterness not dissimilar to bitterness you get from adding tonic to gin.

Paired with the unusual sounding but absolutely gorgeous tasting thyme caramel, this was easily my favourite combination of the night.

Beer 4 was a real curve ball: Abbeydale You Scratch My Back – a one off, limited edition 5.5% stout that’s been made to taste like pork scratchings.

Yes, you read that right. A beer that tastes of pork scratchings. It’s all your pub dreams come true in one glass.

I can’t deny it, this beer definitely has a smoky bacon taste to it. It’s made in the German Rauchbier style which is common to the Dortmund area, where the malt used in the beer is smoked over beech wood. A lot of bacon is smoked over beech, which is why it tastes a bit like bacon.

It’s definitely not one I could drink a lot of, but I enjoyed it for the novelty if nothing else. This one was paired with a dark chocolate and cherry caramel, continuing the German theme.

Beer 5 was the super pretty Pink Moon from Nottingham based Liquid Light Brewing Company – a 4% fruit based wheat beer.

Of all the beers in the world, wheat beer is probably the one I like the least, but with a truckload of raspberries in it, this one was actually pretty good. Wheat beer has a more velvety feel, which comes from the way the sugars break down during fermentation. In this beer it gave it a flavour not unlike raspberry yoghurt.

The chocolate pairing for this one was a vegan coconut chocolate. I’m also not the biggest fan of coconut, so I wasn’t too fussed with this pairing, but it wasn’t unpleasant in any way, just my personal taste.

Beer 6 took us to Belgium with the 7% Chimay Red. Chimay is a Trappist style beer, meaning it’s made by monks and is not-for-profit. Chimay is one of only 13 Trappist breweries in the world, 8 of which are in Belgium.

This one is the lowest ABV of all the Chimay beers, and uses Pilsner malt and yeast distinct to the area its made in, giving it a ripe, peachy flavour that’s characteristic of this style of beer.

Paired with cherry dark chocolate, which really brought out the stone fruit flavours in the beer, this was a beautiful combination, if a dangerous one, as it went down far too quickly to be 7%. 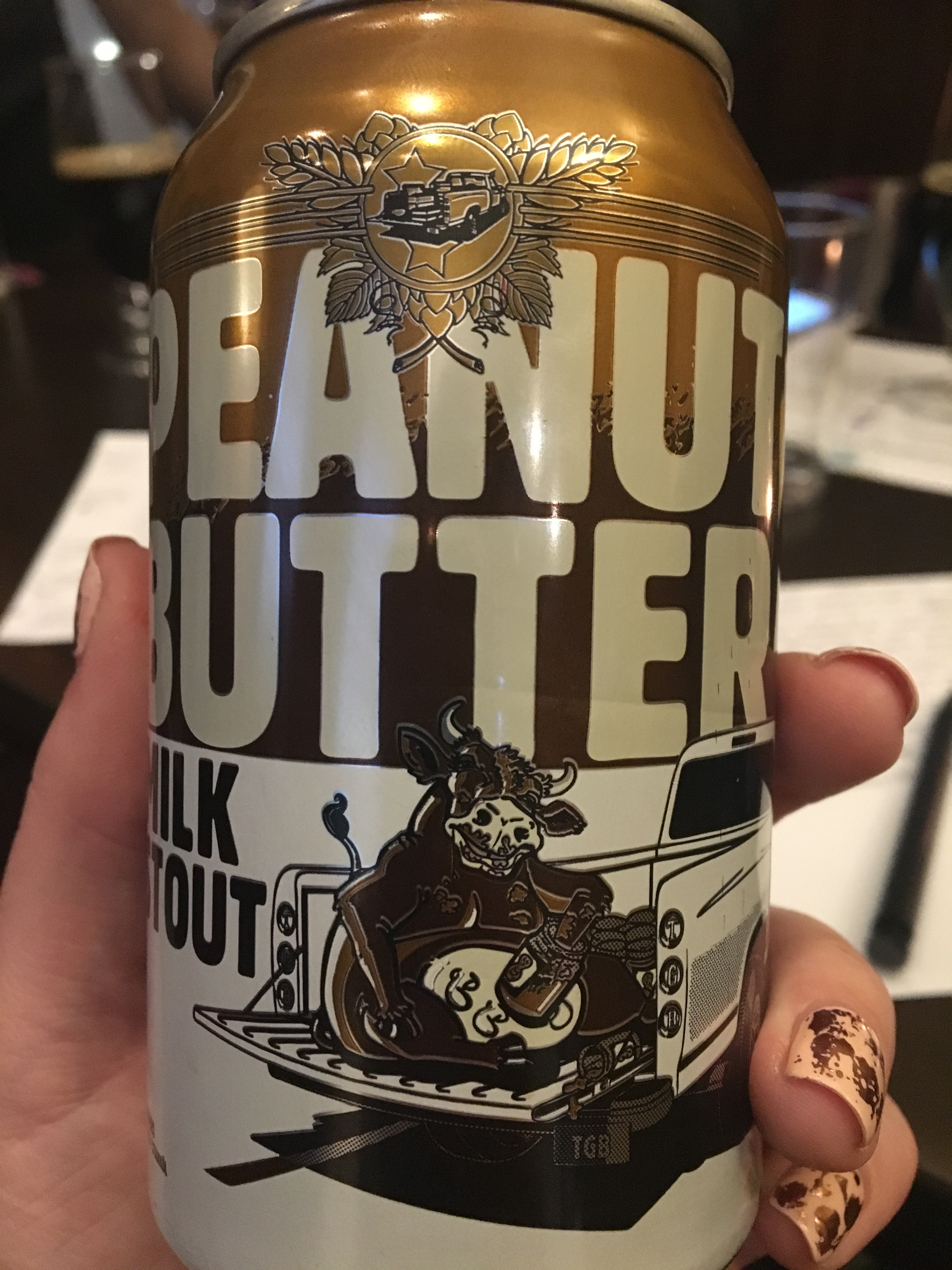 I’m not overstating it when I say this beer actually tastes like peanut butter.  Velvety, beautiful, 5.8% peanut butter. It’s a beer that’s as smooth as Barry White’s voice. It didn’t need the chocolate to be amazing, but the salted caramel that went with it took it to new heights.

Our final beer of the night was one of my all time favourites: Wild Beer Co. Millionaire – a 4.7% milk stout.

Wild Beer Co. are one of the most innovative brewers in the UK, whose use of foraged ingredients and wild yeast give their beers the most amazing flavour profiles. I got major nerd points for knowing how spontaneous fermentation works and what a ‘cool ship’ is thanks to this little beauty. Go me.

Millionaire is named after Millionaire’s Shortbread, because that’s what it’s inspired by. It’s rich, chocolatey, biscuity and properly delicious. Paired with a banana caramel, the combination tasted like a banoffee pie. I urge you to try it at your first opportunity.

Considering how much beer I drank, I’m pretty impressed I remembered so much of the evening. The night isn’t designed to get you smashed (obviously…), rather it’s about appreciating the different styles of beer and either comparing, contrasting or complimenting with the chocolate.

Chris from BottleCraft has encyclopedic knowledge of beer and brewing, but in a totally unpretentious way, so if you’re not a total beer geek like me, or even if you’re completely new to beer, you’re not going to feel left out at all.

The location is gorgeous too, Cock & Hoop is a really cosy little pub with brilliant bar staff and an impressive beer selection. According to Steve, the manager of Lace Market Hotel, the plan is to put on more of these beer tasting events, so keep an eye on their Facebook and Instagram for news if you fancy coming along next time.

You can find Cock & Hoop at Lace Market Hotel, 29-31 High Pavement, Nottingham. The beer & chocolate tasting event cost £25 per ticket and included 8 beer samples, 8 chocolates to try on the night and 4 more to take home.

Studio Chocolate have two locations, the shop at Cobden Chambers on Pelham Street, Nottingham and the event space on Thurland Street.

BottleCraft are based on Piccadilly in Hanley, near Stoke.