The Cube is one of those places that’s always confused me a bit. Other than the flagship Marco Pierre White restaurant at the top, I’m never quite sure what’s there or whether it’s worth a trip, so when I was invited by their PR company to spend an evening at The Cube, I was interested to see what would be on offer.

I headed along with Laura from Bite Your Brum, George from Caramel Latte Kiss and others to check it out.

After one of the most disappointing drinks receptions I’ve ever had at Rodizio Rico (music WAY too loud, slow service, and a mouthful of granulated sugar that was supposed to be a mojito…) we gladly headed to Shogun Teppanyaki for dinner.

If you’ve never been to a teppanyaki restaurant before, it’s all a bit theatrical. We were seated around a large iron griddle where our chef gave us a bit of a show, as well as cooking all our food fresh in front of us.

We started off with an impressive selection of sushi and sashimi, but its worth mentioning that you don’t usually get this as part of the teppanyaki experience. 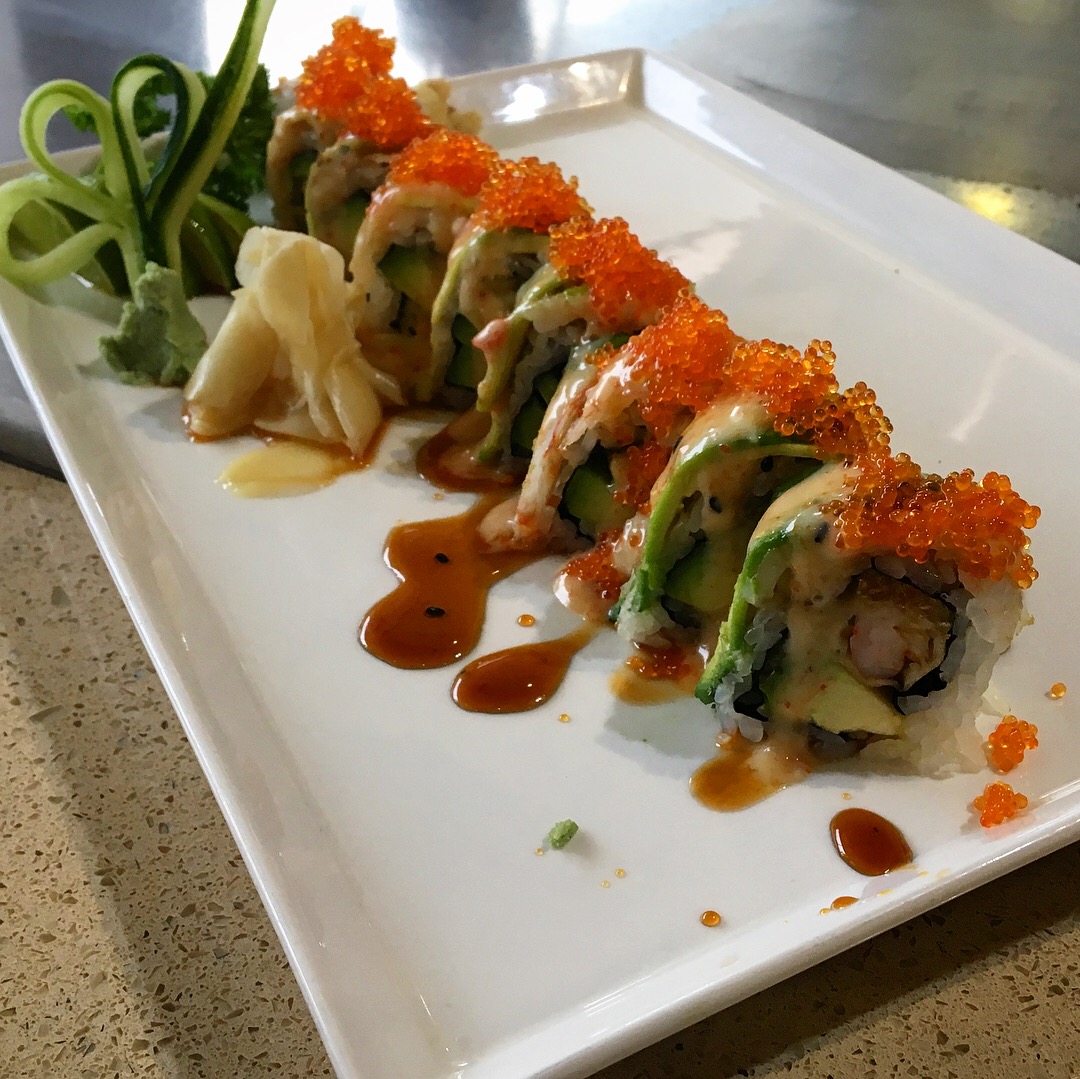 All of the sushi was delicious, but the tuna sashimi and the soft shell crab rolls were my standout options. I could literally eat sushi all day long, but we’d barely made a dent in this selection before the fried appetisers started arriving 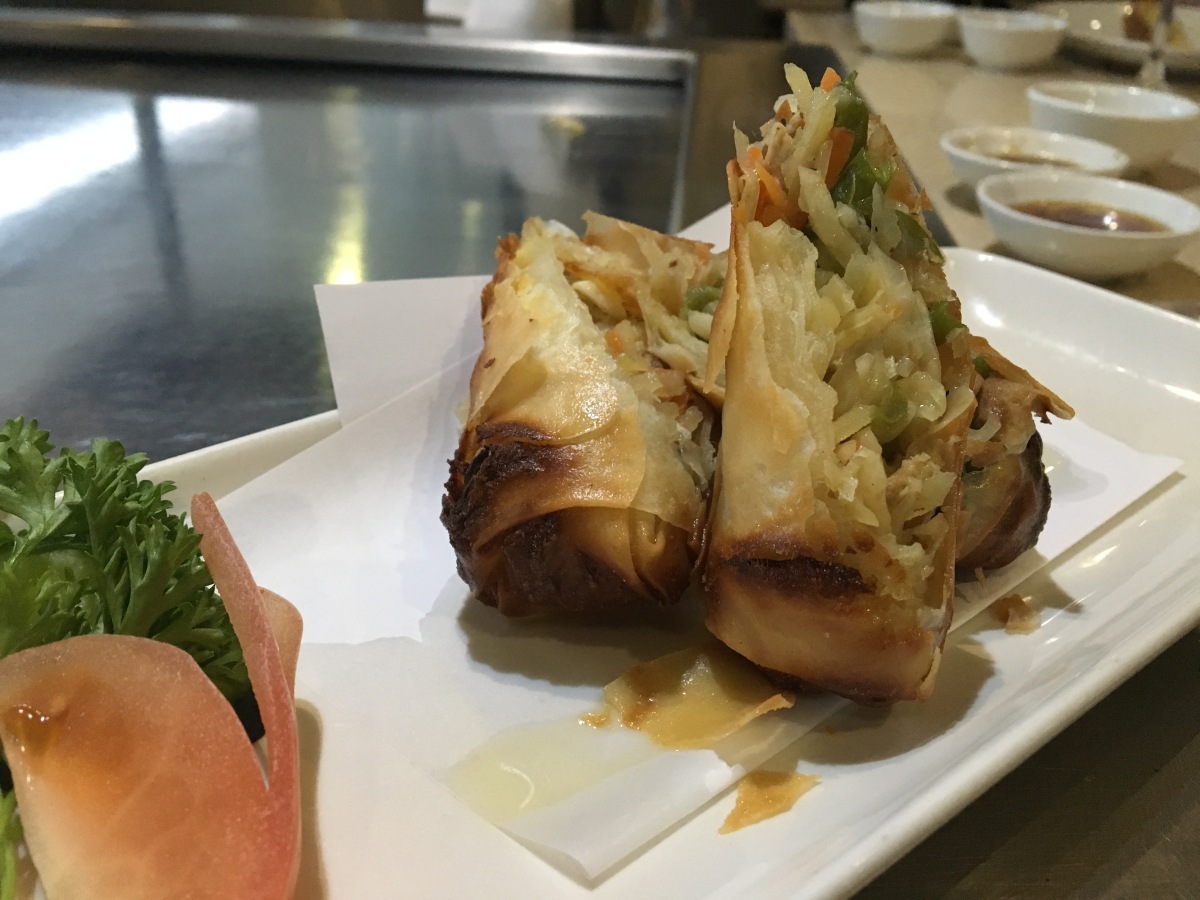 The spring rolls were tasty and packed with crunchy vegetables. The tempura prawns were also tasty, but had quite a lot of batter, which was really filling.

The staff were also VERY specific about which sauces to dip which bits in, which made me laugh.

Then it was onto the main courses, with the first of our teppanyaki dishes being fried rice. 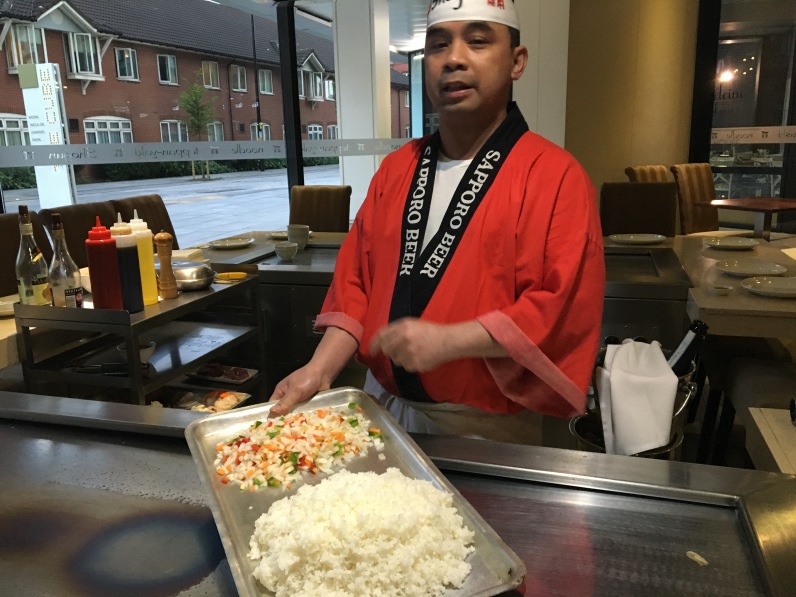 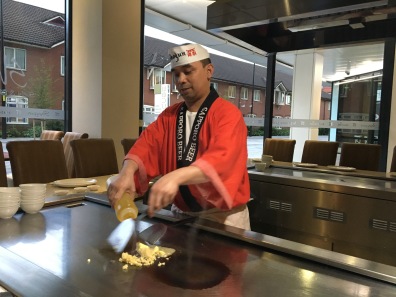 While I enjoyed watching the chef prepare the rice dish, and I thoroughly enjoyed watching Laura from Bite Your Brum having a go on the teppanyaki grill, I wasn’t as big a fan of having bits of scrambled egg thrown at me to try and catch in my mouth, but that’s probably because I didn’t catch mine…

The main spectacle for me was definitely the grilled fish selection. We were spoiled for choice with prawns, lobster tails, queen scallops and salmon.

All of these were cooked really well, and there was enough for most of us to have seconds if we wanted to. The scallops were my highlight.

The meat options were teriyaki beef and lamb, with a side of pyrotechnics. 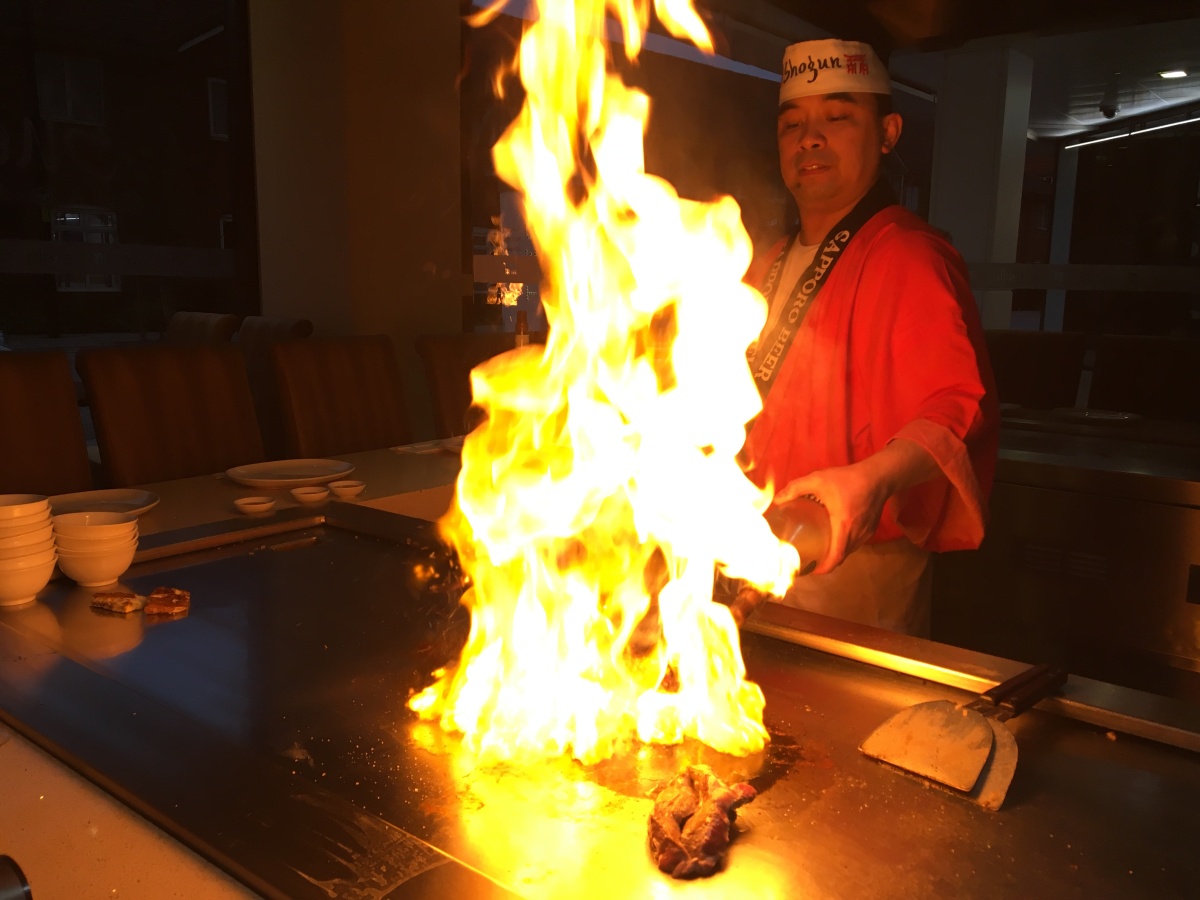 Both were fairly enjoyable, but as they were both marinated in teriyaki sauce, there wasn’t that much difference in flavour.

The sheer amount of food we had was insane, and I think it’s safe to say we all left with a significant food baby situation going on.

Our last stop of the evening was the Haig Club bar for a cocktail masterclass.

Now, I have to be honest right from the outset, I don’t like Haig Club whisky. I’ve also had bad experiences with the management team in the past, so right off the bat I wasn’t expecting this to be a good experience but was hoping to be proved wrong.

While the bar is very attractive with great views, if I’m going to a cocktail bar, I want the cocktails to be delicious, and they just weren’t here. 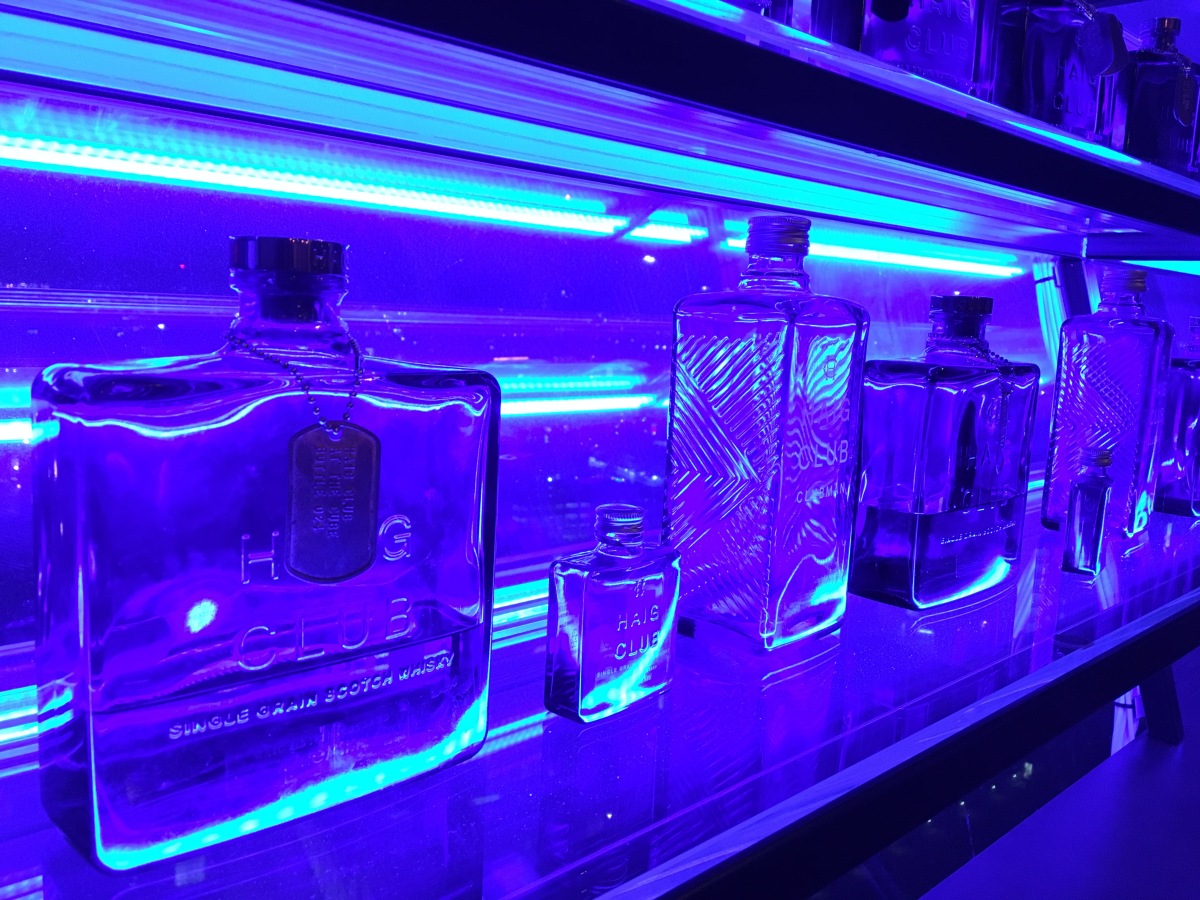 The first of our cocktails to make was their take on an Old Fashioned, which I was distraught to find out contained cola. 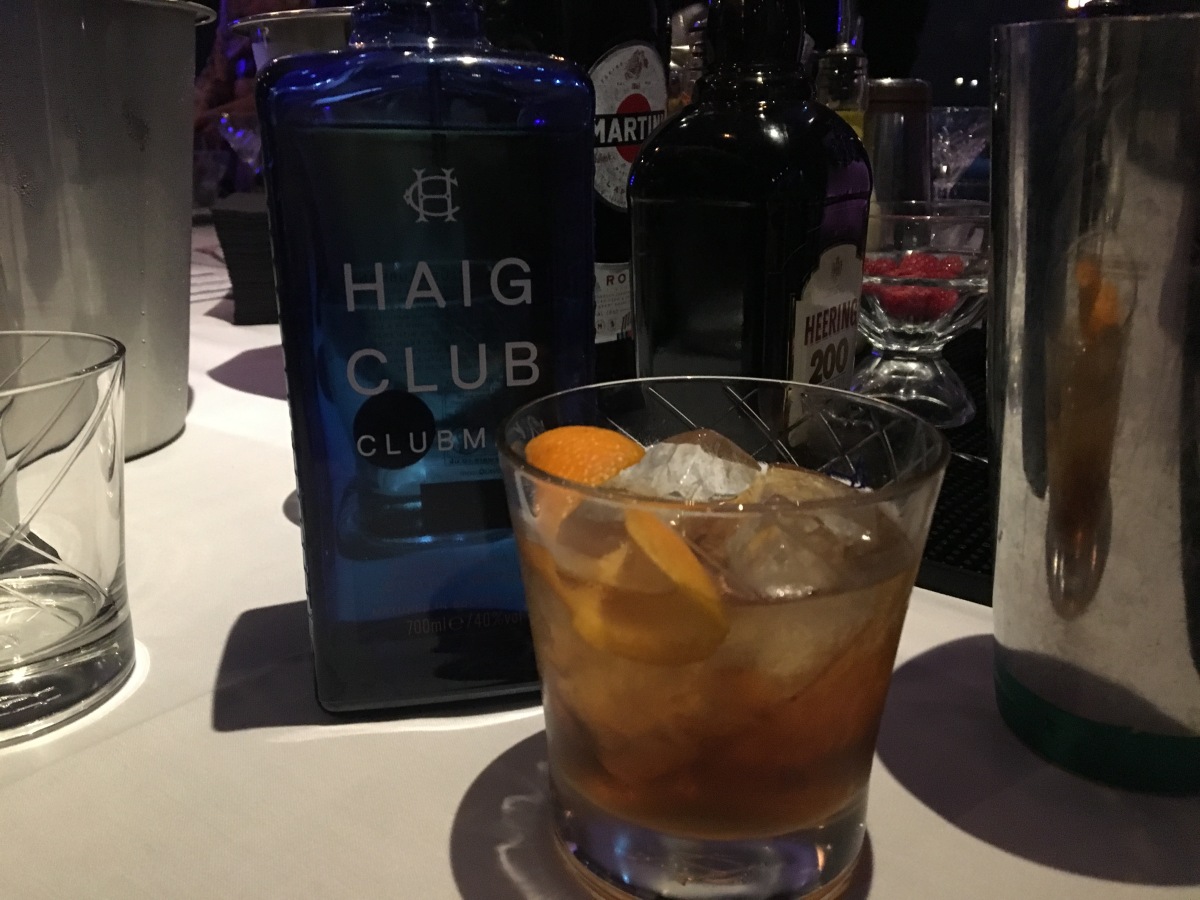 The component parts were Haig Clubman, sugar syrup, a dash of bitters and cola, with a twist of orange to garnish. The resulting drink was sickly sweet and just tasted of cola, the whisky was barely discernable in the mix, but I think that’s largely due to the fact that Haig Clubman itself doesn’t have much flavour. Not a great start for me.

The second was Blood & Sand, which looks good, but again didn’t deliver for me on flavour. 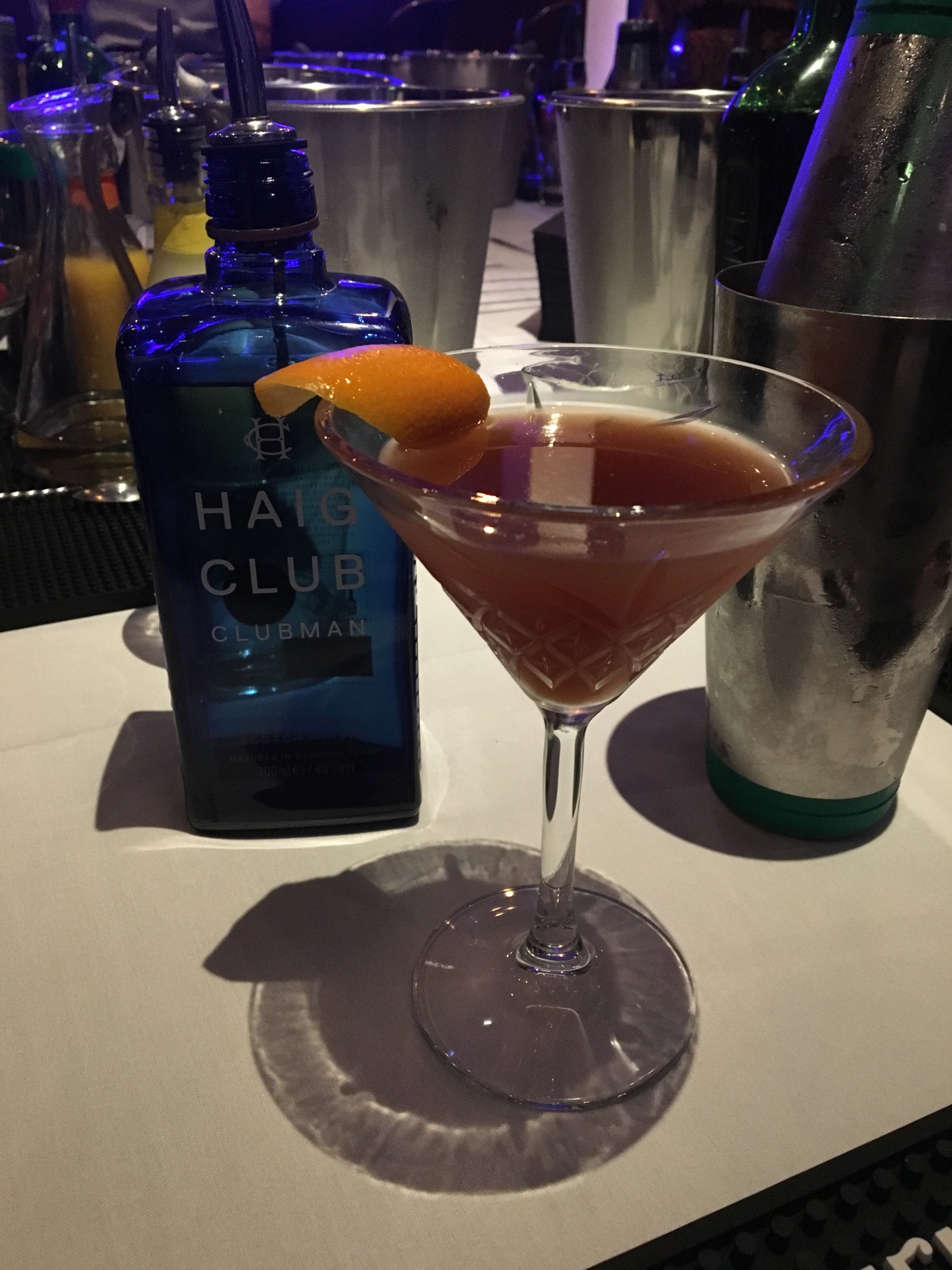 This was a mixture of Haig Club, sweet vermouth, cherry liqueur & orange juice. Again, the whisky was barely discernible and while I thought I’d enjoy the cherry flavour (as I’m a big fan of a Manhattan) I found the vermouth and orange were the dominant flavours in this.

The final drink was the Haig twist on a Bramble, made with Haig Club and Raspberry instead of gin and blackberry.

This was the prettiest, and tastiest, of the 3 we made, but was too fruity and sweet for my palette. Had this had a stronger flavoured whisky in, I think I would have enjoyed it a lot more.

For me, I love the decor and the glassware in Haig Club, but the whole thing just feels like a pretentious gimmick to me, reinforced by the gigantic poster of David Beckham that adorns the wall. The fact they call themselves Birmingham’s first exclusive whisky bar, in the same city as the Birmingham Whisky Club, I find a bit ridiculous considering they only sell one brand. For anybody who is interested in or enjoys whisky, the Haig Club bar isn’t the place for you.

I also found it disappointing that the management didn’t seem to have any answers as to why the place has been closed when so many of us had tried to go there for a drink, what the actual opening hours were, or how the new concept was any different from the original one (other than changing the sofas). It was a disappointing end to the night so I left pretty sharpish after the masterclass ended.

While I enjoyed the experience at Shogun, the other venues we tried left a lot to be desired. It would be tough to convince me to go back to The Cube for a full evening out, but I’d be happy to visit Shogun again in the future.

I was invited to drink & dine at The Cube as a guest, so my meal and drinks were complimentary. My opinions are, as always, my own, and I was under no obligation to provide a positive review.